Digital Society Foundation, the team behind Connect the Blue Continent, is a proud member of the Alliance for Affordable Internet (A4AI).

The Alliance has released the latest edition of its annual Affordability Report, which examines the current affordability environment across 51 developing and emerging countries, and highlights the continued need for urgent work to drive down the cost of a broadband connection. Featuring an interactive data explorer, over 15 detailed country profiles and over 30 practical policy recommendations, it’s a must-read for anyone interested in Internet affordability.

This is an excellent analysis of the state of internet affordability in the countries included..and a guide to the policies needed to drive down costs of internet access – we really need to have this research available for all the communities across the Pacific Islands.

The bad news? More than half of the 51 countries surveyed for the report have not yet met the UN benchmark of entry-level broadband priced at 5% or less of monthly income. None was found to have met this benchmark for those living in poverty (i.e, those earning less than $2/day). Across the countries surveyed by A4AI, a fixed broadband connection costs the average citizen approximately 40% of their monthly income, eight times more than the affordability target set by the UN. Mobile broadband is cheaper but still double the UN threshold, averaging 10% of monthly income — about as much as developing country households spend on housing. The cost to connect is even greater for women and rural populations, who also have to overcome income disparities, infrastructure challenges and other socio-economic barriers in order to connect.

A4AI believes that affordable access is so important, that the UN should put it at the heart of the new sustainable development goals…and we agree.

The good news is that there is a clear roadmap to translate this vision into reality. The report highlights policy and regulatory steps proven to drive prices down.

The report also presents an Affordability Index, which scores countries based on the current affordability environment and policies in place to ensure future affordability. As a region, Latin America leads the way toward enabling affordable broadband, nabbing six of the top ten spots on the Index. Costa Rica’s robust national broadband plan and innovative efforts to expand access to rural and other offline populations earned the country the number one ranking, while similar initiatives in other countries of Latin America contributed to the region’s high rankings. While all countries surveyed in the report have a long way to go before broadband is truly affordable for all their citizens, there are many positive examples and valuable lessons to be learned.

Read the full A4AI report, interact with the data, and explore global affordability at a4ai.org/affordability-report.

We have made a submission to the Pacific Plan Review 2013 – a vital regional review taking place throughout 2013.

Our submission provides more information on our initiative to Connect the Blue Continent – and in particular our call for a master-plan to be developed for digital connectivity across the region.

It’s short and easy to read – see below.

Submission to the Pacific Plan Review 2013

For more information on the Pacific Plan Review 2013, see here. 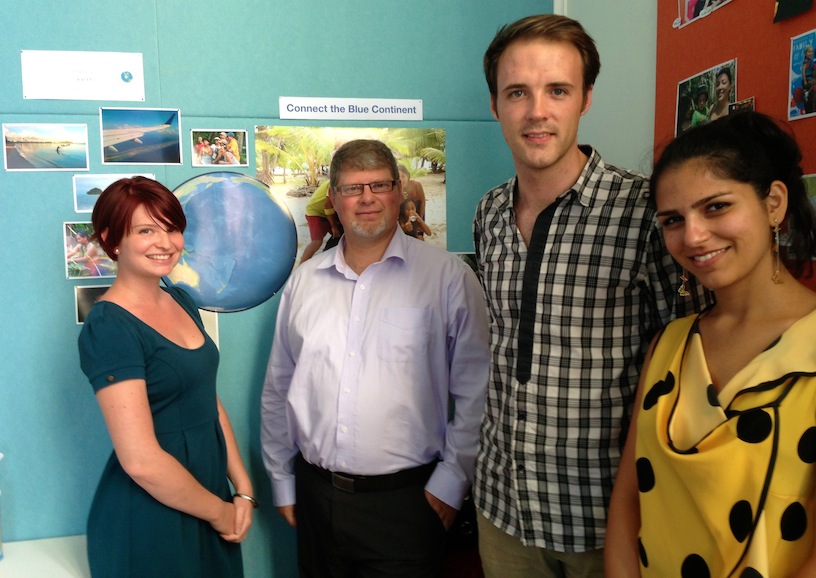 We discussed alignment of Dan’s initiative to increase Pacific representation of youth at the UN with our focus on affordable broadband access to remote communities.

It was inspiring to see Dan’s enthusiasm for giving young people in the Pacific a voice and to see how our broadband access initiative could assist.

Among other things, we discussed the MyWorld2015 survey that the UN are running to establish development priorities beyond the Millennium Development Goals. This will be the biggest survey ever of global needs and it’s vital that remote communities in the Pacific have an opportunity to participate.

We discussed how broadband access assists all of the 16 UN themes and we have drafted a paper on this alignment – see here.

We look forward to working with Dan into the future – good luck with the rest of your term in the UN hot seat Dan !

Take a look at Dan in action at the UN here http://www.unyouthrep.com/blog/speech/